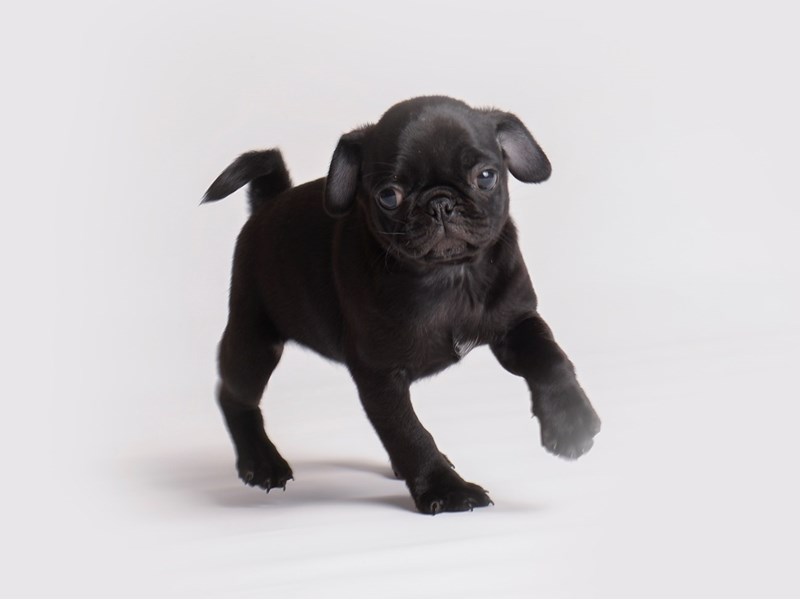 Want more information on this Pug? Please fill out our Pet Inquiry form below. 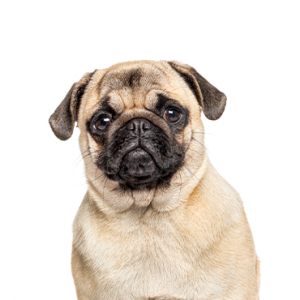 The Pugs have been the top choice for royal families in the Netherlands and England at some point in time. Queen Victoria’s passion for them is one of such encounters the pugs have with Kings and Queens. This isn’t very surprising as the pugs are known for good companionship traits. Discover more about our Pug puppies for sale below!

These traits make them effortlessly loved by their owners. The pug stands out physically; with bulky muscles, a wrinkly face, a curled tail, and a fine coat. The pug’s coat is usually in a variety of colors that commonly include the black and fawn. Despite their physique, the pugs are categorized as toy dogs, this buttresses their intimacy with humans.

The pug has origins majorly from China and Netherland. The Modern pugs are imported from China; the earliest breeds have also been known to originate from there. However, the pugs have a history with royal families in the Netherlands and England.

The pugs from China are the most recent appearance of pugs; They are characterized by their short legs, and noses which weren’t elongated. The Modern style pugs were brought in to Britain in 1886 from China.

The pugs were tended by the ruling families in China. The imperial court kept pugs because they were treasured by the Emperors who assigned guards to protect them while they (the pugs) lived in extravagance.

Keeping pugs in Europe started at the House of Orange in the Netherlands. The pug became the official pug of the house after it saved the Prince of Orange from Assassins. When William III and Mary II accepted the throne of England in 1688, they were accompanied by a pug.

Although these pugs were said to have been brought from China, the pugs from Europe at that time, as seen in pictures depict longer legs and nose. The pugs became prominent in the United States in the nineteenth century. They easily became family companions and show dogs.

They became recognized by the American Kennel Club in 1855. The Pug makes a good show dog; A pug prevailed in the Westminster Kennel Club Dog Show organized in the United States. This occurred in 1877, it was the first time a pug would be winning the show since it began.

The pug would do anything to please its owners this is what makes them suitable to keep in many homes. Their loyalty is unwavering, they do well with children their calmness and sturdy physique allows them to tolerate children easily. Their Alertness makes them good security dogs but they are not predominantly used for security purposes. Pugs are stubborn, but this does not transform into aggressive manners.

The pug thrives indoors. It is usually kept close to families that own it. It is classified by most Kennel Clubs as a toy dog. Despite their adaptation to heat, pugs cannot thrive well outdoors in hot and humid regions

Pugs do not require high-intensity exercises; however moderate exercising will be sufficient. A reserved and reasonable amount of space for the dog to move around is ideal.

The pugs have a fine coat that is sufficient to protect them from heat and cold. The coat doesn’t require too much attention. Maintaining a pug has low requirements. However, wrinkles and eyes have to be cleaned daily.

The unregulated breeders who are selling outside of the USDA regulations and without a license are what we consider to be “Puppy Mills.” We are committed to offering Pugs puppies who will grow up to become important members of your family. We only purchase puppies from the very best sources, and we stand behind every puppy we sell.