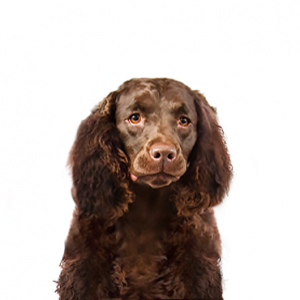 The American Water Spaniel is just an adorable dog breed. Originally raised as an all-round hunting dog, they have the adaptability for diverse terrains, water inclusive. They come fully packed with a ton of energy and although it’s in their genetic makeup to hunt and retrieve, with some training they’ll make excellent house pets. This breed is incredibly friendly, especially around kids. They have a water-resistant double coating which enhances their swimming skills and helps them stay afloat. Discover more about our American Water Spaniel puppies for sale below!

This breed was developed back in the mid-1800s in Wisconsin, the Fox and Wolf River valleys to be precise. The American Water Spaniel hails from about four ancestral breeds. This includes the Irish Water Spaniel, the Field Spaniel, Curly Coated Retriever and although it’s presently extinct, the Old English Water Spaniel. This hunting breed retrieves the likes of ducks, quail, pheasants, grouse, something it can carry easily.

However, they were soon put out of use when a larger breed was developed, the retrievers. The American Water Spaniel was facing possible extinction before Doctor F.J Pfeifer took it upon himself to keep breeding and selling them. His efforts saved the breed and although there are less than 3,000 American Water Spaniels today, it was UKC recognized in 1920.

The American Water Spaniel is a very lively, loving, conscious, and obedient breed provided its owners create an environment filled with attention and consistent training. In the absence of this training, they tend to be somewhat manipulative or even stubborn. The American Water Spaniel loves companionship and is definitely not the type of dog you can leave at home for hours at a stretch, they could bark till you return because they’re bored. They need early socialization and exposure to different views, sights, terrains or sounds just so they can be well-rounded. Nevertheless, this breed makes a great dog for the family and because of its love for attention, it’s likely to be around those who shower him lots of it.

This breed can thrive more in a temperate or hot environment better than they can tolerate the cold ones. They do love running around in open fields, so a walk at the park should be included in the daily routine for this breed. They are generally great companions and can fairly adapt to apartment living too. You may have to get them their own doggy house but other than that, they are well suited for any type of life as they are very resilient. However, this breed is definitely not a security dog, they’re more for companionship as house pets because they are neither aggressive nor hostile. The American Water Spaniel can be great for novice dog owners as they are small in stature and do not pose much threat.

The American Water Spaniel breed has the outdoor blood in their veins. Their ancestors loved running, swimming, hunting and retrieving game, hence, owners will have to substitute that for great exercise routines and sports. This breed has a high energy level hence they are always willing to play, which is what makes them great for kids and toddlers. All they need is an hour or two a day to express their physicality freely either at the park or in the yard and they’ll be good for the rest of the day. This dog breed is quite easy to train, can be very mouthy and have the drive for wanderlust. Nevertheless, this breed is quite playful and doesn’t demand an insane amount of exercise.

The American Water Spaniel is a double-coated dog breed meaning that the undercoat is for protection from harsh weather conditions and the outer coat acts as the breed’s main coating. Fur brushing should be done weekly except in the spring as the American Water Spaniel sheds during this season. Hence, increasing the brushing frequency will prevent you from dealing with too loose fur. This breed isn’t supposed to be bathed frequently as this could remove the natural oils found in the dog’s coat and consequently diminish the coat’s insulation abilities. Hence, only bathe this dog when it’s obviously dirty or smelly.

The unregulated breeders who are selling outside of the USDA regulations and without a license are what we consider to be “Puppy Mills.” We are committed to offering American Water Spaniel puppies who will grow up to become important members of your family. We only purchase puppies from the very best sources, and we stand behind every puppy we sell.

The American Water Spaniel is a small dog breed and it fully matures between the height of 1ft 3” to 1ft 6”.

A mature American Water Spaniel weighs anything from 25-45 pounds.

This dog breed doesn’t have any degenerative health ailments which are genetically traced, however, like most dogs they are likely to suffer from hip dysplasia, allergies, epilepsy, and other ailments. This is why it’s important to see the health clearances of these ailments for your adopted puppy’s parents before the adoption process is complete.

This is dependent on the age of the dog but mature dogs are expected to feed at least twice a day.

The American Water Spaniel is actually a very beautiful dog breed that could have either brown, dark chocolate, or liver.

Yes. Kids and toddlers will find this breed delightful.

Kids will particularly enjoy the curly and shiny hair  of this breed.

This breed is very observant hence, they are quite easy to train.

Are you interested in purchasing a American Water Spaniel?