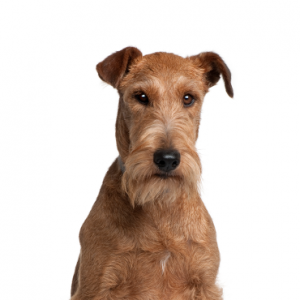 Commonly described as the farmer’s friend, the terrier breed is one raised mainly to counter vermin. The Irish Terrier is one such breed which is widely believed to be native to Ireland. They serve as great watchdogs and have a reputation for being great companions. Discover more about our Irish Terrier puppies for sale below!

Historically, they have a reputation for fearlessness. They are nicknamed the ‘red daredevil’ which is a reference to the color of their coat and their stoutheartedness. The origin of the Irish Terrier is unknown.

They are believed to be a descendant of the black and tan-terrier variant dogs of Ireland and Britain. Albeit a conjecture, it is opined that they share bloodlines with the Irish Wolfhound. They were formerly of different colors and types.

Irish Terriers were raised to be thorough vermin killers. What they lacked in looks, they made up for in gameness and working qualities.

Just before the end of the 19th century, they were the first members of the terrier group to be acknowledged by the English Kennel Club. They would go on to the United States where they became quite popular.

They are excellent with people when they receive early socialization training which also helps them become great family companions. They are not as active as the Irish Setters and can be quite relaxed when indoors.

They love relaxing with their owners. If in a home infested with vermin, then they can get rowdy indoors. They can be left alone indoors as they are a calm breed. They enjoy a variety of mental and physical challenges and can excel at different dog competitions.

Irish Terriers thrive well in a human-populated living space as they love to be around their owners. They are not as welcoming of strangers as the Irish Setter.

They love mental and physical challenges and as vermin hunters, they do well in environments where they can hunt down these rodents.

This reason is why they have been nicknamed the farmer’s friend, as earlier in history, they were popular on farmlands hunting down rodents that threatened farm crops and produce.

Irish terriers don’t do well with other dogs. They are known to be aggressive to canines of the same sex. They can be trained to live with cats, however.

They don’t back down from a fight and they fight to the point of serious injury to themselves or other canines. The size of other dogs cannot deter an Irish Terrier from baring its fangs.  They are great escape artists so you might consider raising your fences a little higher.

Irish Terriers love the outdoors and would love to take a few minutes outside the walls of a house daily. They require exercise in the form of walks or jogs a few times a day. Activities like Frisbee tossing is great for them.

They love energetic plays. It is best to play with them in a well-secured area as they can easily get distracted by the sight of other dogs.

They have a love for water and can go swimming with you. It is not only fun but an exercising activity for them. They are swift and possess endurance and lack of exercise can make them difficult to stop if they become destructive.

Irish Terriers do not shed heavily. It is advisable to brush their coat once a week to get rid of dead or loose hair to give them a clean look. Smoothing down the hair encourages blood flow to their follicles.

They have a water-repellent coat that is impregnable for dirt so bathing is not necessary for them. Bathe them only if the need arises. Their nails should be trimmed occasionally.

The unregulated breeders who are selling outside of the USDA regulations and without a license are what we consider to be “Puppy Mills.” We are committed to offering Irish Terrier puppies who will grow up to become important members of your family. We only purchase puppies from the very best sources, and we stand behind every puppy we sell.

Constant exercise and play will keep them healthy and active.

As mentioned earlier, they don’t shed heavily. Their shedding is minimal.

Irish Terriers can be housebroken as they are intelligent and respond well to training.

Irish Terriers exhaust their energy when playing so a diet of high-quality dry kibble is necessary. Dry food helps to avert oral health problems for them.

This depends entirely on the owner. It is, however, inadvisable to do this at a young age.

They are prone to a severe skin condition called ichthyosis.

They have a life expectancy of about 13-15 years.

A height of 48 cm is common for them but it is not unusual to see them grow an extra two centimeters.