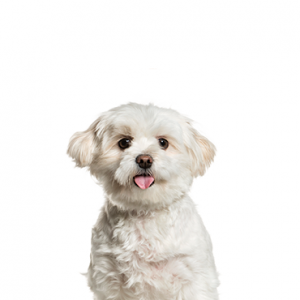 The Pomapoo is a special dog breed made with the crossing of Poodles and Pomeranians. The adorable teddy bear-like appearance of a Pomapoo, combined with its intelligence and loyalty, makes it a favored breed by people all over the world. Discover more about our Pomapoo puppies for sale below!

The popularity of the Pomapoo rose in the 90s when the demand for designer dogs heightened. Prior to this popularity, no dog breeder has officially claimed to be the mastermind behind crossing Poodles and Pomeranians.

Despite being originated from purebred dogs, the Pomapoo is yet to be officially recognized as a dog breed by the AKC (American Kennel Club). Though the Pomapoo is supposed to be a 50-50 percent combination of a purebred Poodle and Pomeranian, over the years some Pomapoos have more than 50 percent of one breed in its genetic makeup. Most breeders, however, chose to stop the crossing after the first generation to keep the Pomapoo with an even percentage.

As a crossbreed, the Pomapoo possesses characteristics of both a Poodle and a Pomeranian. They are generally friendly and affectionate towards people. Though their Pomeranian side might make them quiet around strangers, they are not aggressive hence may not make the best guard dogs.

Pomapoos are open to living with other dogs and early socialization can also make them open to cohabiting with other animals. They are also easy to train because they have an eagerness to please their owners.

The Pomapoo is a little dog that craves human contact. The best place for this dog breed is a home with a large backyard. While you can let them out to play frequently, they can’t be kept outdoors. Because the Pomapoos are very small dogs, they don’t occupy much space in a house.

You can give them a corner in your living room or bedroom. They also enjoy playing around in a big yard. One of the characteristics of a Pomapoo is adaptability hence they can easily fit into your home and lifestyle.

The Pomapoo, just like every other dog, requires regular exercise. Fortunately, it does not take much effort to keep them fit. They mostly require a walk daily to remain fit. Any other exercise requirements can be fulfilled while playing with them.

Pomapoos are more than happy to follow behind you in the home while you carry out your daily activities. The fact that they don’t require too much exercise makes them perfect for busy and elderly people.

The unregulated breeders who are selling outside of the USDA regulations and without a license are what we consider to be “Puppy Mills.” We are committed to offering Pomapoo puppies who will grow up to become important members of your family. We only purchase puppies from the very best sources, and we stand behind every puppy we sell.

The Pomapoo is a small dog with an average height of 8 to 10 inches and an average weight of 10 pounds. Some Pomapoos grow taller and weigh more, depending on their genetics.

There are Pomapoos with a silky coat while there are others with a curly coat. The silky coats are easier to groom because they only require brushing once a month. The curly coat, on the other hand, requires a daily brush down.

No, they aren’t. The Pomapoo has a very sweet and affectionate nature. They are friendly to both owners and strangers. They are also friendly towards other dogs.

Pomapoos are one of the most accommodating breeds of dogs. They easily adapt to your lifestyle and do not require too much in terms of care.

Almost anything on the house menu is great for a Pomapoo. They are not selective with food. It is important that you also include kibble in their diet to keep their teeth strong.

Pomapoos have about 4 to 6 liters of very small puppies. They require special care to avoid hurting them. Breast milk from their mother will sustain them until they’re old enough to eat semi-solid meals. Socializing your puppy from a young age is necessary so they can remain friendly as they get older.

The life expectancy of a Pomapoo is 12 to 14 years.

A Pomapoo can be prone to epilepsy, cataracts and patellar luxation. Some Pomapoos may have excess discharge from the eyes.

Pomapoos learn quickly so you can start training them from 8 weeks.

Yes. Pomapoos can become obese when overfed with wet food.

If you want an intelligent, loyal and obedient dog, the Pomapoo is the best kind of dog for you!